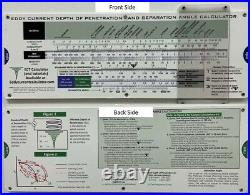 Just search " Eddy Current Slide Rule Calculator ". Whether you're an NDT Student, Eddy Current Trainee or ASNT Level III, this UPDATED slide-rule calculator will save you lots of time and make you look like an ET wizard!! The Eddy Current Calculator is an analog computer that uses logarithmic scales to calculate various parameters used in Eddy Current Testing. If you get one, you'll have to keep a close eye on it because your Eddy Current buddies will try and take it from you! This ECT calculator is an updated version of a slide rule that has been around for decades, and has enhanced instructions for ease of use, and also additional graphics (Standard Depth of Penetration, Effective Depth of Penetration, Conductivity Curve, Liftoff Curves, Thinning curve, and Separation Angles).

These graphics help the user reinforce understanding of the interaction between conductivity, thickness, depth of penetration, and separation angle, which is useful to suppress the effect of liftoff when making conductivity and thickness measurements. Remember, you can pick a lot of different frequencies to perform a test, but using the OPTIMUM frequency can help improve the accuracy of measurements, while reducing the effect of lift-off.

With the Eddy Current Calculator, you can quickly determine the following for any non-ferrous metal. The test frequency needed to make a specific depth equal to 1d, in Hz, kHz, or MHz.

Prime and F90 frequencies for optimal flaw detection for surface OR tubing inspections. Or mm in a material at which the separation angle (the angle on the impedance plane between the thinning curve and the lift-off curve) is equal to 90°. The frequency for optimal thickness testing of a material having a known nominal thickness, to achieve a separation angle of 90°.

The frequency necessary to make conductivity measurements with minimum interference from both thickness changes and lift-off yet measure completely through the part (180° separation angle). There are six tutorial sample calculations on the back of the Eddy Current Calculator (with answers provided) that the user can practice with to ensure they understand how to operate the Eddy Current Calculator. Additional tutorials and loads of other free ECT information available at eddycurrentcalculator.

One of the reasons the Eddy Current Calculator is a great learning tool for eddy current enthusiasts, is that when learning how to operate the calculator, the user is constantly observing the interrelationships between test frequency, test part thickness, and test part conductivity for a variety of materials. Because of this, users develop a skill that allows them to perform fast mental calculations and also develop a feel for the reasonableness of an answer.

The slide rule provides information on many test variables at once, not just one or two variables like most apps. The batteries never go bad either. Another problem with apps is that you don't what formulas the app answers are based on.

This item can be shipped worldwide.